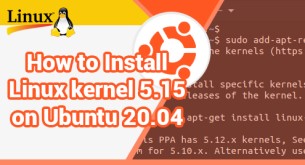 Linux kernel 5.15 is the latest stable LTS kernel version and was released on Halloween, October 31 2021 by Linus Torvalds which brings some interesting new features, such as a new NTFS file system implementation that doesn't require you to rely on third-party software like NTFS-3G to fully manage your NTFS formatted external disk drives.

Here at LinuxAPT, as part of our Server Management Services, we regularly help our Customers to perform related Linux kernel installation queries.

In this context, we shall look into how to install Linux kernel 5.15 LTS.

NOTE: It is not recommended to install this kernel on production servers since it comes from an untrusted PPA. The safest bet is to continue using the kernel that came with your Ubuntu server.

The PPA is preferable for those who want to test out the new kernel and see how it performs in various hardware environments.

Other improvements provides by Linux kernel 5.15:

First, make sure that all your system packages are up-to-date by running the following apt commands in the terminal:

Now you need to enable the TuxInvader PPA. This is a PPA that is built for LTS releases and allows users to install specific kernel versions.

The PPA provides Linux kernels 5.12.x and later versions. Source packages for the PPA are built using this container hosted on Docker hub.

To enable the TuxInvader repository, execute the command:

Press 'ENTER' when prompted to complete the addition of the repository. Once the repository is added, update the package lists to synchronize the system with the newly added repository:

From here, installing the Linux kernel 5.15 is a stringhtforward process. Simply run the command:

The command installs a host of kernel packages , modules and Linux tools.

Now we open a terminal and run commands one by one to download and install the packages:

Next, install a new kernel using the following command below:

Once the installation is complete, reboot your Ubuntu system:

Log in once more and verify that you are now using the new LTS Linux kernel:

To keep the new LTS kernel up to date, simply perform the basic system update and upgrade from time to time with the below command:

Also, be sure to reboot once you have updated the kernel.

[Need help in installing any open-source Software ? We can help you. ]

This article covers how to install the Linux kernel 5.15 on Ubuntu 20.04 LTS Focal Fossa system. In fact, The Linux kernel is the main component of a Linux operating system (OS) and is the core interface between a computer's hardware and its processes.

To keep your kernel 5.15 up to date, you will use the apt update and upgrade commands to pull updates from the PPA repository just like any other package on your Ubuntu system.

To check for updates and upgrade.

Remember, for any kernel updates, and you will need to reboot your system.

Install MERN Stack for JS Based Applications on Ubuntu 20.04 - Step by step guide ?

Best Open-source Screenshot Tools for Ubuntu – How to Install and Use?

Install and Use Linuxbrew on Ubuntu 20.04 LTS Linux system