Best Open-source Screenshot Tools for Ubuntu – How to Install and Use? 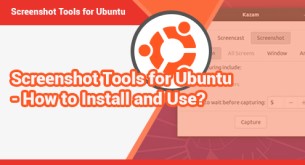 Nowadays most OS built in screenshot tools which lets you take the screenshot of your device's entire screen. If you are content writer or tech enthusiastic you may browse your preferable content or article throughout the web and you may take or want to take a screenshot of the content for future references.

Here at LinuxAPT, as part of our Server Management Services, we regularly help our Customers to perform related Linux system tools installation queries.

In this context, we shall look into best and popular screenshot tools along with its features and way to install it in Ubuntu.

Best Useful Screenshot Tool to use on Ubuntu Linux system

Flameshot is cross-platform open-source screenshot software written in C++ and QT5. It is simple use and fully configurable via Command and GUI. It supports in app screenshots and offers a different editing tool to draw lines, circles, text, blur etc. Screenshot also can be uploaded to imgur.

Install flameshot on your system using the following command:

Shutter is feature-rich screenshot software which lets us take the screen shot of the specific area or entire screen. It allows us to draw on image to highlight the points along with editing tools like adding texts, arrow, rectangles, crop images etc. Shutter has been removed from the repositories due to old Gnome 2 libraries so we need to install it from ppa:

Imagemagick is an open-source and powerful tool for displaying and editing images in more than 200 formats and taking screenshots of specific portions of the screen. It's the command-line base tool for taking screenshots. It provides features like making the image transparent as well as adding special effects to an image and many more.

You can install imagemagick on your system using the following command:

Once installation completed you can take screenshot by executing the following import command:

Kazam is both a video recording and taking screenshot multi functioning software tool. It was the first screencast with on the fly encoding and screenshot feature. Just like other tools it has a GUI which provides a list of options to take the screenshot. In the GUI you will find different selectable options to take a screenshot.

To install and use it execute the following command:

You can also launch the tool by searching for screenshot from system application launcher.

Screencloud is a screenshot sharing software that works on Linux, Windows, and Mac OS.

It starts as an indicator applet offers menu options & keyboard shortcuts to take screenshot of selection, full-screen, and window.

Screenshot URL is automatically copied to clipboard, if you have pre-defined settings, for easy sharing with your friend. Supported online services include: Dropbox, Imgur, Google Drive, OneDrive, FTP/SFTP, Shell Script.

The software is available as Snap, so you can easily install it from Ubuntu Software. For choices, an Appimage is also available to download in the link below:

Grab the .appimage package, make it executable in file "Properties -> Open With" dialog, and finally run it to launch the tool.

You'll see a child window with options to capture window, full-screen, and selected area. And screenshot will be opened in a new GIMP window automatically.

To install GIMP, run the command:

[Need support in fixing open-source Software Configuration issues ? We can help you. ]

This article covers the best open source screenshot tools for Ubuntu Linux system. In fact, Screenshots come in handy especially when you want to illustrate or demonstrate something to a colleague or a friend or student. Most Linux distributions, including Ubuntu, come with their default screenshot tools.