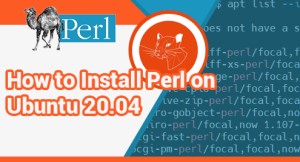 Perl is a programming language that is responsible for creating different algorithms. It is used for administration, GUI development and Web development.

Here at LinuxAPT, as part of our Server Management Services, we regularly help our Customers to perform related Perl queries.

In this context, we shall look into how to install Perl on Ubuntu 20.04.

How to install Perl on Ubuntu ?

Update the system's package with the below command:

2. Install Perl on the system

To do this, Run the apt command:

To do this, Run the following command:

You can check its version by running the below command:

Examples of using Perl on Ubuntu

Then type the following lines:

Then, Save and exit this file.

[Need help in fixing Perl issues ? We can help you. ]

This article covers how to install Perl on Ubuntu 20.04. In fact, Perl is a general-purpose, high-level, interpreted programming language. It is the acronym of Practical Extraction and Reporting Language, initially, Perl was designed as a scripting language to make report processing easier.

How to install Perl in Ubuntu ?

1. Refresh the local package repository and upgrade all packages to a newer version:

2. Once your system gets updated, use the following command to install Perl in your system: