Python While Loop in Linux 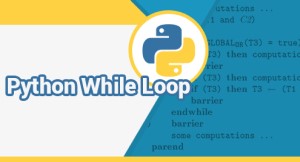 while loop in python is used to execute a particular piece of code over and over. It will repeat until the condition you set is satisfied. The line immediately after the loop will be executed if the condition becomes false. Basically, while loop is of indefinite iteration.

Here at LinuxAPT, as part of our Server Management Services, we regularly help our Customers to perform related Python function queries.

In this context, we shall look into how to use the while loop in Python.

What is the While Loop in python ?

The while loop will loop until the condition you set is satisfied.

If the condition becomes false, the line after loop will be executed.

The Syntax of while Loop in Python is given below:

In Python, the body of the while loop is determined through indentation.

The body starts with indentation and the first unindented line marks the end.

Python interprets any non-zero value as True. None and 0 are interpreted as False

Examples of using Python while Loop

1. Let's take a quick look at the below While Loop function:

When you run the program, the output will be:

Here, the test expression will be True as long as our counter variable i is less than or equal to n (10 in our program).

We need to increase the value of the counter variable in the body of the loop. This is very important (and mostly forgotten). Failing to do so will result in an infinite loop (never-ending loop).

2. While loop with else

Same as with for loops, while loops can also have an optional else block.

The while loop can be terminated with a break statement. In such cases, the else part is ignored. Hence, a while loop's else part runs if no break occurs and the condition is false.

If you run the program, the Output will be:

Here, we use a counter variable to print the string Inside loop three times.

notice that on the fourth iteration, the condition in while becomes False. Hence, the else part is executed.

3. Consider the below function:

4. while loop with break statement

break still stops the loop even though the condition is true.

[Need help in fixing Python function issues? We can help you. ]

This article covers how to use the while loop in Python. In fact, Loops are used in programming to repeat a specific block of code.