Install and Use Neofetch on Linux ( RHEL /CentOS / Arch ) - Step by step Guide ? 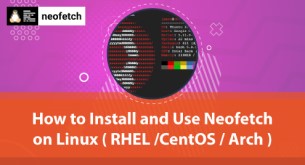 There exist different methods of retrieving system information such as the OS type, kernel version, CPU, RAM, and other details about the host system. One of the handiest tools that you can use to display system information on the terminal is the Neofetch tool.

Written in bash 3.2+, Neofetch is a free and opensource command-line tool that displays system and hardware information in a visually appealing manner. Neofetch shows the very basic information you might need to know such as the type of operating system you are running, screen resolution, the kernel, installed packages, memory, and uptime to mention a few. This information is displayed along with your OS logo.

Neofetch supports over 150 operating systems: from Linux, Windows, and even obscure systems such as AIX, Minix, and Free BSD.

Here at LinuxAPT, as part of our Server Management Services, we regularly help our Customers to perform related Linux System tools configuration queries.

In this context, we shall look into how to install Neofetch on major Linux distributions.

How to install Neofetch in Debian / Ubuntu systems ?

To install Neofetch on  Debian and Ubuntu-based distributions, simply run the following command as a sudo user:

To launch Neofetch, simply run the following command to display the OS and system details:

To install Neofetch in RHEL and CentOS, first install the EPEL repository with the below command.

For RHEL, add the EPEL repository as follows:

Once EPEL is installed then install Neofetch with the below command:

For Rocky Linux 8, some additional steps are required since Neofetch only display a generic Penguin ASCII art instead of the Rocky Linux logo.

Thankfully, there is an updated Code from Neofetch that now supports Rocky. Therefore, you need to update Neofetch using the updated code as follows:

Now, you can run the Neofetch command and this time around, you will notice the ASCII has changed to reflect the Rocky Linux logo.

How to install Neofetch in Fedora ?

For Fedora 30 and later versions, simply run the following command to install Neofetch:

How to install Neofetch in Arch Linux, Manjaro ?

For ArchLinux , use the pacman package manager to install Neofetch:

How to install Neofetch in OpenSUSE ?

Finally, for SUSE systems such as OpenSUSE Tumbleweed and Leap, use the zypper package manager to install Neofetch:

1. To use Neofetch, you can just enter the neofetch command, with no further options, in terminal:

2. Want to see the ASCII logo for a different distribution? Use the --ascii_distro option, and specify the name of the distro you wish to see:

3. We can get Neofetch to output even more information. For example, the --de_version option can instruct Neofetch to display the version number of our desktop environment:

4. It's also possible to omit any information you want from the Neofetch output. Use the --disable option, then specify the categories you want to disable:

5. Neofetch can be used for more than just showing off neat screenshots. It's a slick way to obtain concise system information. For example, just specify the specs you wish to see:

[Need help in fixing Linux based system issues ? We can help you. ]

This article covers different ways of installing Neofetch on major Linux distributions. In fact, Neofetch is a handy tool when you want to display information about the system you are working on. It's mostly useful in tutorials and guides when you want to show your readers the OS and hardware type you are using.

To see what other options you can specify with Neofetch, run the neofetch --help command.