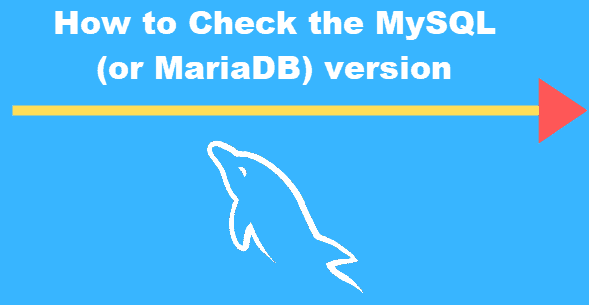 MySql is a relational database management system that permits users to organize data in the database. Knowing which MySQL version is running on your server may be useful in some cases due to certain differences between MySQL versions. If you’re installing an application that requires a specific MySQL version, for example, you’ll need to know what version of MySQL your MySQL server is before you start.

Here at LinuxAPT, we shall look into the different ways to check the MySQL version in Linux.

How to check the MYSQL version on Linux ?

1. Using the command line, you can check the MYSQL version

Run the following command into your terminal:

To ascertain the server version, run the binary with the –version or -V lines:

Note: Before quitting, the command above will indicate the version of MySQL installed.

To determine the installed MySQL version, use the following command with the mysqladmin program:

2. Using the MYSQL shell, you can check the MYSQL version

The MySQL utility command client is used to find out what version of MySQL your operating system has installed. On the MySQL shell, use the following command to connect to the MySQL server:

Once the server has been connected to the MySQL shell, the MySQL version will be displayed on the screen.

The status command displays the current status of the server, as well as the MySQL version.

To use the status command, run the following command:

Use the query version variables as suggested to acquire more information about the MySQL installed version and all of its related components:

3. Using MySQL Workbench, you can check the version of MySQL.

Another way to check the version of MySQL installed on your machine is to use MySQL Workbench.

4. Using PHP, you can check the version of MySQL

If you're on a shared hosting account and don't have access to a command line or a MySQL client like PhpMyAdmin, you can use PHP to find out what MySQL server version you're running.

[Need help in fixing MySQL issues on your Linux system ? We can help you. ]

This article covers the ways to check the MySQL version in Linux. In fact, MySQL (and its drop-in replacement MariaDB) is the most popular open-source relational database management system. There are some important differences between MySQL versions, so knowing which version is running on your server might be important in some situations.

How to Check MySQL Version with V Command ?

The easiest way to find the MySQL version is with the command:

The command mysql –V is not OS specific. This command works on Windows, OS X, and Linux distributions including Ubuntu.