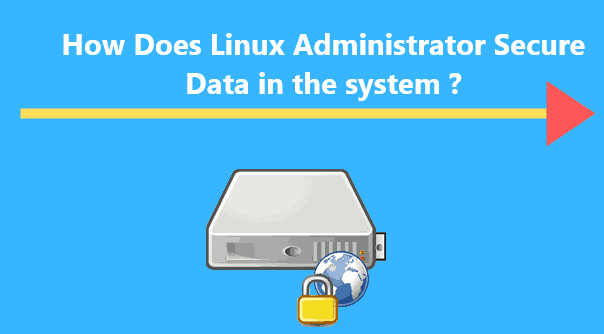 Nowadays, data security is a major problem to deal with in this era of technology. Even though Linux users are less vulnerable to viruses than users of other operating systems, there are still several security challenges that Linux users and Linux administrators must deal with. A strong understanding of the principles of Linux, as well as some of the programs and protocols that are utilized, is required to build a strong security policy on a machine. So, that's why we will discuss how Linux administrators can secure data on their Linux machines.

After determining why security is necessary, think about the characteristics of security that are needed, like authentication, authorization, privacy, integrity, non-repudiation, and so on. Many types of attacks can be performed on your computer by hackers, crackers, or phreakers, like reading your data and changing it, denial of service (the system's services are disabled or rendered inoperable by the attacker), address spoofing, trojan horse virus, and many other ways. Linux administrators need to secure data.

Here at LinuxAPT, we shall look into the different ways Linux administrators use to secure data in their system.

Lynis is a good example of such programs. Even though the application was established many years ago, it is still useful. It can test a Linux system's security measures daily and make recommendations for improving such measures.

Although most businesses employ powerful firewalls to protect themselves from external threats, they seldom filter traffic between systems on their internal networks. As a result, if one machine is hacked, attackers may be able to spread the infection to other systems in the same network. The addition of iptables on Linux systems is a straightforward approach for reducing data streams to the bare minimum. You can also install the GUFW application for the graphical configuration of firewalls.

With minimizing data streams, it's critical to log sensitive data streams so that security flaws and data breaches can be detected. System administrators are recommended to keep their firewalls up to date and inspect them regularly.

There was a period when only traffic with a fair chance of transferring private data, such as passwords, was encrypted. This is because encryption wasn’t free. Computers excel at calculating data but encrypting every bit of communication adds delay. That isn't as much of a problem as it once was. We've arrived at a stage where there's no good reason not to encrypt traffic to and from your machine. "LetsEncrypt" provides free TLS encryption, and maintenance over SSH is no longer an issue. We are sure there are some exceptions, but this will provide better encryption.

We won’t go over the importance of strong passwords because it's already been said. Many systems, however, still allow users to create weak passwords. System administrators can prevent this by requiring the use of strong passwords with modules like pam_cracklib and pam pwquality. Such modules are beneficial because they employ technology to enforce security regulations, reducing the need for humans to decide whether to use strong passwords.

5. By Installing only the necessary packages

It's easy to install all the packages you believe you'll need in the future, but the more packages you install on a server, the greater the risk. For instance, if you do not want to host DNS, don't install DNS packages or keep the service ports open (53).

[Need help in fixing Linux system security flaws ? We can help you. ]

This article covers the ways in which Linux administrators can secure data by advancing security scanning, using network filters and firewalls, using secure protocols, using strong passwords, and finally, by installing only necessary packages. In fact, many are attempting to steal your information, so your data is in danger on the system.