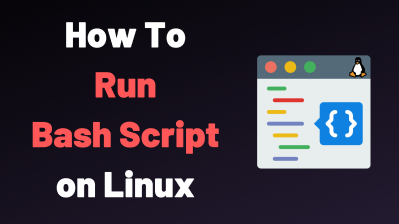 Shell scripting is regarded as an alternate method of running the commands via the terminal. This is a better alternative of executing the commands through the terminal because a shell script once written can be executed multiple times without having to recall complex commands every now and then.
Here at LinuxAPT, as part of our Server Management Services, we regularly help our Customers to perform Linux related queries.
In this context, we shall look into the different methods of creating and running a shell script in Linux (Ubuntu 20.04).

Methods to create a Shell Script in Ubuntu 20.04 ?

You can also use any other text editor instead of using the nano editor, however, we have chosen it solely because it is the easiest one to use. Moreover, you can also give any name of your choice to your shell script followed by a .sh extension.

c. Then we have printed a random message by making use of the “echo” command. After making these changes to your shell script, just save your file and close it by pressing Ctrl+ X.
d. The script file will be saved in the home directory, by default. If you want to check, execute the following command on the terminal:

Another method of creating a shell script in Ubuntu 20.04 is by making use of the GUI which can be done as follows:
a. You need to click on the File Manager icon located on the taskbar.
b. Once you are in your Home directory, right-click anywhere to launch a menu and choose the New Document option from that menu. Then choose the Empty Document option to create a file.

c. Give any name of your choice to that file and add a .sh extension after that name. We have named our file as ShellScript.sh. After creating a shell script file, you need to double click on it to open this file and then type the script shown in the following image in your shell file. This script is the same as we discussed in the method above. After typing this script, just save your file and close it.

How to execute a Shell Script in Linux ?

Now when a shell script has been created, the next step is to run this script which can be done with the help of any three of the methods listed below. All of the methods assume the script file is located in the home directory which is the default path.

For following this method, there are two basic steps that are described below:

Do not forget to add the “sudo” keyword before this command as this will cause your terminal to render an error message.

ii. Running the Shell Script:
Once the execute permission has been set for your shell script, you can easily execute it by running the following command in your terminal:

[Need urgent support in fixing Linux related errors? We are available to help you. ]