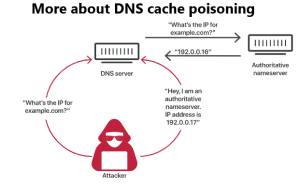 DNS poisoning is a very deceptive cyber threat. It is a type of cyberattack, which exploits server vulnerabilities to divert traffic away from legitimate servers to fake or malicious ones. Once you've navigated to the fake page, despite being the only one who can solve it, you may struggle while resolving the issue. You need to know exactly how everything works to protect yourself from it.

Without completely understanding how your computer connects to the Internet and then to your desired websites, a DNS poisoning attack may deceive you into thinking that the website itself has been hacked. Though in some cases, it may just be your device, if the attack is carefully planned the extent of the damage can be very extensive.

DNS stands for "Domain Name System". Consider it to be like a huge directory for the Internet.

When a user types in the URL/domain name of their desired website in their browser window (e.g., www.youtube.com into google chrome), a DNS would then translate the human-friendly URL into machine-friendly IP addresses (e.g. 192.168.0.1). These IP addresses are uniquely assigned to each device connected to the internet. This part is also known as DNS resolution.

Simply put, to locate the web page and its resources requested by the user a DNS takes the URL, converts it into an IP address, accesses the resources and displays them on the web browser.

Here at LinuxAPT, we shall look into more about DNS cache poisoning.

What is DNS cache ?

How is a DNS cache poisoned ?

How to prevent DNS cache poisoning ?

It is very hard to eliminate the threat of a poisoned DNS cache because even if the infected server is completely cleaned, individual user devices can still return to the malicious sites and cause problems for their users. Yet, it is possible to enhance the chances of avoiding a cache from being poisoned.

Prevention can be considered a two-fold responsibility for the end-users as well as the website owners and the DNS service providers.

[Need help in fixing DNS Domain issues ? We can help you. ]

This article covers all about DNS cache poisoning attack and how can you help prevent it. In fact, It is imperative that you stay vigilante to prevent such attacks, otherwise you might end up with your data at risk, leave your devices at the risk of malware infection or forced censorship, and even the attacker might halt your security update leaving you vulnerable to a plethora of other attacks.

How can I prevent DNS attacks ?

What is difference between DNS spoofing and DNS poisoning?