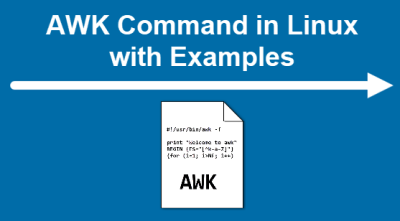 AWK script is suitable for pattern search and processing which runs to search one or more files to identify matching patterns and if the said patterns perform specific tasks. It allows you to write mini scripts in the form of terminal commands with which you can easily manipulate the files in Linux.

Here at LinuxAPT, we shall look into the most significant features of the AWK command in Linux, and then we will head on to a few examples that make use of this command.

Examples of using the AWK Command

If you have the test file (testfile.txt) with contents below:

1. Using the AWK Command for Printing a Single Column of a File

In this case, we wish to print a single column of the text file using the below command:

This command will print the second column of the test file, i.e., the names of the cities of the UK on the terminal.

2. Using the AWK Command for Printing Multiple Columns of a File

This command will print the second and third columns of the test file, i.e., the names of the cities of the UK and their respective area codes on the terminal. However, if you will skip the comma between the column numbers in the above-mentioned command, then these columns will be printed without any space in between.

In this case, we want to pair up the AWK command with the logical operators in Linux. We want to define different conditions to get the desired output with the below command:

4. Using the AWK Command for Printing the File Information

Now, we want to use the AWK command for printing the file-related information on the terminal, such as the name of the file, the total number of rows and columns, etc. For that, we have used the AWK command:

[Need help in fixing Linux issues ? We can help you. ]

This article covers the usage of the AWK command in Linux.  In fact, AWK can use to manipulate text in documents or perform specific functions.

What Operations can AWK do ?

What is AWK Syntax ?

It is given below:

What is CHOWN Command in Linux ?

Check Ports in Use on Ubuntu 22.04 (Jammy Jellyfish)

DMIDECODE Command in Linux - How to use it ?