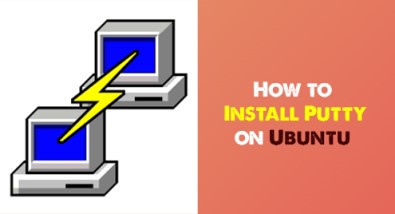 System administrators who have used Windows users might be well aware of the Putty application. Putty is a free, open-source, and most popular SSH client used to connect remote systems running SSH server. It supports various protocols including SSH, telnet, SCP, rlogin, etc.

Putty is also available for Linux OS. Although Linux systems have built-in SSH command which is used to connect to a remote server ; still they can use the Putty for this purpose.

This is helpful if you have worked long in Windows and are more comfortable with this tool.

Here at LinuxAPT, as part of our Server Management Services, we regularly help our Customers to perform related putty queries on Ubuntu Linux Servers.

In this context, we shall look into how to install putty in Ubuntu. The installation commands have been run on Ubuntu Terminal.

Also, note that you will require sudo privileges to install Putty on your Linux distribution.

You can follow the same method for the installation of Putty on Debian and Mint OS.

How to Install Putty on Ubuntu ?

Here are the steps to install Putty on Ubuntu.

1. Add the universe repository to your system's local repositories. Execute the below command to do so:

2. Update the repository index. You can update it as follows:

When prompted with the y/n option, press y to start the installation.

Once the installation is done, you can start using the Putty utility on your system.

You can launch Putty either through the Terminal using the command below:

Or hit the super key and type putty in the search area.

From the search result, click the Putty icon to open it.

This will display the Putty interface.

To connect to a remote system, type its IP address or hostname in the relevant field. Then type 22 in the port number field and choose SSH as the connection type.

Then click Open to initiate the connection to the remote system.

The first time when you try connecting to a system, you'll get a security warning.

This indicates that you have not connected to this system before.

How to Uninstall Putty from Ubuntu ?

You can easily remove Putty from your system if you want to do so.

Here is the command you need to execute in Terminal to remove Putty from Ubuntu:

[Need assistance in fixing Linux SSH related issues ? We can help you. ]

This article covers how you can install Putty on your Ubuntu OS. Now you can use your Putty SSH client on Linux to connect to remote systems. For more help regarding Putty, visit its user manual.

PuTTY is a popular terminal emulator for Windows, but it is not only limited to Windows operating system.

Being free and open source, it is popular among Linux users too. PuTTY supports a wide range of protocols such as serial, SSH, Telnet, rlogin, SCP, SFTP etc.

Sysadmins generally use PuTTY as an SSH and telnet client whereas the Maker community widely uses PuTTY for interfacing with the serial ports on their hardware.

PuTTY ships with a command line tool named "psftp", the PuTTY SFTP client, which is used to securely transfer files between computers over an SSH connection.

To install PuTTY on Ubuntu:

1. In order to install Putty, you will need to ensure that the Universe repository is enabled on your Ubuntu system. If it is not already enabled, you can enable it by using the following command in Terminal:

2. After enabling the Universe repository, now you can install Putty on your system. Issue the following command in Terminal in order to do so: