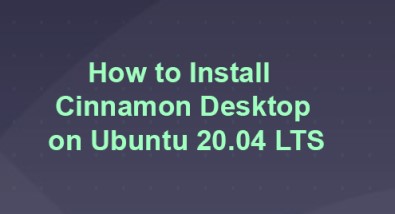 Cinnamon is the default desktop environment of Linux Mint. Unlike Unity desktop environment in Ubuntu, Cinnamon is more traditional but elegant looking desktop environment with the bottom panel and app menu and so on.
Many Windows migrants prefer Linux Mint over Ubuntu because of Cinnamon desktop and its Windows-resembling user interface.
Now, you don't need to install Linux Mint just for trying Cinnamon.
Here at LinuxAPT, as part of our Server Management Services, we regularly help our Customers to perform Linux related queries.
In this context, we shall look into how you can install a Cinnamon desktop on a base of Ubuntu 20.04 LTS instance.
Previously, we covered the method of installing the GNOME desktop on Ubuntu 20.04.

How to Install Cinnamon Desktop on Ubuntu ?

To begin, ensure that your are running commands as the root user or with Sudo privileges.
Then, Execute on the terminal to update the local repository:

To Install Cinnamon Desktop on Ubuntu,
Execute on the terminal.

You will be prompted with y/n. Press y key and hit Enter from your keyboard.

Now, You will see a desktop where you will login.
Once you successfully log in with your credentials, you will have the user interface of Cinnamon desktop.

How to Uninstall Cinnamon Desktop from Ubuntu 20.04 LTS ?

Execute on the terminal when you no longer need this desktop.

[Need support in installing any Software Packages on your Linux System? We can help you. ]

This article covers steps to install Cinnamon desktop on your Ubuntu 20.04 system.
Want to try out the Cinnamon Desktop Environment?

Without installing Linux Mint, you can get the desktop packages in Ubuntu via a few commands.
Cinnamon is available in Ubuntu main repositories, though the package version is however a little old.
Ensure to enable universe repository and then use this command to install Cinnamon on Ubuntu 20.04: