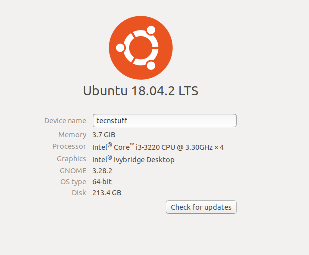 It's easy to upgrade to Ubuntu 18.04 without reinstalling the operating system.

Ubuntu provides two types of releases, one is Standard release and second is Long Term Support (LTS) release. A new Ubuntu 18.04 LTS release is available to upgrade, if you are already using an Ubuntu version.

Here at LinuxAPT, as part of our Server Management Services, we regularly help our Customers to perform related Ubuntu queries.

How to Upgrade Ubuntu ?

To begin, you need to first take backup of your data and put it to safe location before start upgrade process.

After you have taken backup of your data, go to your terminal and execute following commands:

Check Prompt value and it should lts.

By this upgrader it will search only for the available LTS upgrades:

So now your system is ready to upgrade.

Now, Upgrade process will start and take some time based on your system performance and internet connection speed.

But, no need to worry just follow on-screen instructions and It will be done.

Next, you must reboot your system once upgrade process will complete.

So now you can check ubuntu version details using command line by fire below command:

For desktop editions go to Settings > About.

You can see upgraded version details.

That's it. Finally, you upgraded your system to Ubuntu 18.04 LTS.

[Need urgent remote Linux Support? We can help you. ]

This article covers method to Upgrade Ubuntu 16.04 to Ubuntu 18.04. If you are still using Ubuntu version 16.04, you may want to consider updating to the latest Long Term Support release, version 18.04.

What does LTS or Long Term Support Release Mean?

A Long Term Support release or LTS release, means that Ubuntu will support the version for five years.

If you are running a production environment, you will likely want to use a Long-Term Support version of your preferred server operating system.

7. The ifupdown network manager is removed on new installs and is deprecated. netplan.io is the new network configuration manager.

8. OpenSSH now refuses to use RSA keys smaller than 1024 bits. This command can report the length of a key.

32-bit PowerPC support has been dropped.

1.  Create a backup of your environment.

2. Run the command below to update and upgrade the packages.

3. To add the Update Manager to your server add command below to your terminal.

4. Now that you have created a backup installed package updates and have the upgrade manager you are ready to upgrade Ubuntu.

5. To check what version of Ubuntu is currently installed use the command below.