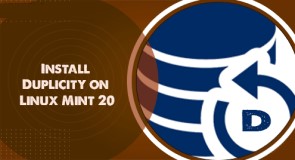 Duplicity is a free backup software that allows you to create encrypted and digitally signed backups of your data for ensuring its authenticity. You can also keep a track of all the backup versions with this tool.

The backups can be created both locally or remotely. Duplicity is a cross-platform backup tool that first creates a full backup of the desired data and then maintains their incremental backups.

Here at LinuxAPT, as part of our Server Management Services, we regularly help our Customers to perform Software Installation tasks on Linux Mint System.

In this context, we shall look into how to install Duplicity on a Linux system.

How to install Duplicity on Linux Mint 20 ?

To install Duplicity on your Linux System, follow the steps outlined below.

1. Update the Cache of your Linux System:

You can update your Linux Mint 20 system with the command shown below:

The "-y" flag is used over here to bypass the confirmation message during the system update.

When the update process completes, you will be able to install Duplicity on your system.

2. Install Duplicity on your System:

Now, you can install Duplicity on your system with the following command:

Again, we have used the "-y" flag with "install" command so that our Linux system does not ask for confirmation during the installation.

After performing this step, you will have Duplicity installed on your Linux system.

3. Check if Duplicity is Installed on your System or not:

We can confirm the installation of Duplicity on our Linux system by executing the command shown below in our terminal:

How to Uninstall Duplicity from Linux Mint 20 ?

Whenever you want to remove Duplicity from your system, then you can conveniently execute a very simple command shown below in your terminal:

This command will not only remove Duplicity and its configuration files from your Linux system but will also clean up all the extra packages and dependencies so that your system's storage space is conserved.

[Need urgent assistance in installing any Software on Linux Mint System ? We can help you. ]

This article covers how to install Duplicity on your Linux system. After doing that, you will be able to maintain the backups of your critical data and hence prevent data loss. Moreover, you can also easily remove this backup software tool from your Linux system.

If you are a system administrator and responsible for managing servers than backing up data is one of the most important tasks of you.

So you must have enough knowledge of backup tools that makes your task easier.

Duplicity is a free, open-source and an advanced command-line backup utility built on top of librsync and GnuPG. It produces digitally signed, versioned and encrypted tar volumes for storage on a local or remote computer.

To install and configure Duplicity to perform manually and automate backup on Ubuntu 20.04 server:

1. You can update all of them with the following command:

2. After updating all packages, you will also need to install some required dependencies on your server. You can install all of them by running the following command:

3. By default, Duplicity is available in the Ubuntu 20.04 default repository. You can install it by just running the following command:

4. Once installed, verify the installed version of Duplicity with the following command: