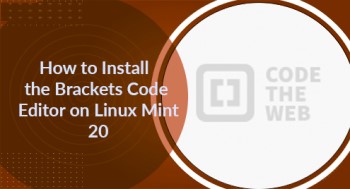 Brackets is a code editor that was launched in 2014. It provides you with all the latest tools for frontend development. You can enjoy this code editor on Linux, macOS, and Windows operating systems.

Here at LinuxAPT, as part of our Server Management Services, we regularly help our Customers to perform related Code Editor queries on Linux Systems.

In this context, we shall look into the process of installing Brackets code editor on a Linux Mint 20 system.

How to Install Brackets Code Editor for a Linux Mint 20 System ?

To install Brackets code editor on a Linux Mint 20 machine, follow the steps given below.

To use the Snap Package Manager for installing the Brackets code editor on your Linux Mint 20 system, you first need to install the Snap daemon with the command shown below:

Once the Snap daemon has completed its installation on your system, you can install the Brackets code editor through it by running the following command:

After installing the Brackets code editor on your system, you can launch it via your terminal by executing the following command:

How to Uninstall Brackets Code Editor from a Linux Mint 20 System ?

To uninstall Brackets code editor from your Linux system, you need to execute the following command:

[Need help in Installing Open Source Software on Linux Mint System? We can help you. ]

This article covers the process of installing Brackets on a Linux Mint 20 system. Once this code editor is installed on your system, you can conveniently use it for professional-level frontend development.

Brackets is a modern open-source code editor for HTML, CSS and JavaScript that’s built-in HTML, CSS and JavaScript. It has two great features: quick edit and live preview. It was created for front end developers and designers and has a very attractive interface. Brackets is developed by Adobe and is focused on web designers and front-end developers.

1. make sure that all your system packages are up-to-date by running these following apt commands in the terminal.