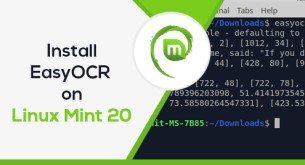 OCR stands for Optical Character Recognition. It basically plays a very vital role whenever you need to extract some form of textual data from images. As a Linux user, you need a good OCR software like EasyOCR that can process your images without damaging their quality and extract all the possible useful textual data from them.

Here at LinuxAPT, as part of our Server Management Services, we regularly help our Customers to perform related Linux system Software Installation queries.

In this context, we shall look into install EasyOCR on Linux Mint 20.

First, you need to update the package index by running the command that follows:

2. Install PIP3 on your System

3. Install EasyOCR on your System

Once pip3 is successfully installed on your Linux Mint 20 system, you can easily install EasyOCR on it by using this package manager with the help of the following command:

How to Uninstall EasyOCR Removal from Linux Mint 20 ?

1. Remove EasyOCR from your System:

First, you need to remove the EasyOCR package from your system by executing the following command:

2. Remove PIP3 from your System (Optional):

Moreover, you can also remove pip3 from your system if you want by running the command stated below:

[Need help in fixing Linux system Software installation issues ? We can help you. ]

This article covers the process of installing EasyOCR on Linux Mint 20. In fact, EasyOCR command line tool is an open source application which can be used to identify and extract text from images. It uses Optical Character Recognition (OCR) technology and a variety of different algorithms and language models to detect the text.

Reset Root Password on Debian 11 - How to get it done ?

Check File Permissions with the "ls" Command on Linux Mint 20